Well-known author Matteo Sedazzari introduces us to his novel A Crafty Cigarette, Tales of a Teenage Mod with a foreword by Punk legend and Manchester Poet John Cooper Clarke.

A Crafty Cigarette is the powerful story of a teenager coming of age in the 70s, as seen through his eyes.  On the cusp of adulthood he discovers a band that is new to him, The Jam, which leads him into becoming a Mod.

A mischievous youth prone to naughtiness, he is attracted to the Mod ethos like a moth to a flame, which in turn gives him a voice, confidence and a fresh new outlook towards life, his family, school, friends, girls and the world in general.

Growing up in Sunbury-on-Thames, he finds life rather dull and hard to make friends. Then he and his family  move across the river  to Walton-on-Thames in 1979, the year of the Mod revival, where to his delight he finds many other Mods his age and older, and slowly but surely he starts to become accepted and furthermore soon becomes a leading light within the young Mods of his peer group.

Their tender years and their appearance, combined with a distinct lack of funds but rigid parental control prevents them from attending Mod related events like gigs and clubs in London, thus our eponymous hero, along with his new band of brothers, Vinnie, Rick and Tom have many adventures out in the suburbs, ranging from fighting the local pub men, standing up to a local skinhead bully, to nicking Bruce Foxton’s bass.

Our hero’s adventures are not strictly within the confines of Mod, he finds himself bonding with the rebellious kids at his school, causing chaos at any given opportunity with the teachers.

Crafty Cigarette goes beyond just being a tale of a young Mod’s passage into adulthood; it also focuses on the pitfalls of success or rather the lack of it.  It highlights the failure of his father’s circus career, who once worked with the famous Italian clown Charlie Cairoli, only to be sacked by Cairoli whilst he was on the verge of making it, thereby making his father the Pete Best of the Clown world.

The ramifications of this blow to his proud father’s ego just adds to the confused and crazy skewed outlook of our young hero.

Crafty Cigarette is a distillation of the metamorphosis of youth, embodied with a rebirth of the key character upon hearing the opening chord of The Jam’s song ‘All Mod Cons’ and then growing up at a frantic pace in keeping with Weller’s shouted ‘1,2,3 4’ intro.

Written in the first person, the story rocks along at a fast clip, on a par with a supercharged Jam single… a compelling narrative with the key character struggling to find his identity against the backdrop of late 70s chaos.

Without being nostalgic or sentimental, A Crafty Cigarette is a candid snapshot of English suburban life in the late 70s and early 80s.  The book is raw, honest, dark and witty with the values and culture of Mod being paramount throughout, though not always presented as the ‘be all and end all’.

A Crafty Cigarette is a powerful story and arguably, not since The Who’s ‘Quadrophenia’, has there been such an in-depth study into the confused and multi-faceted lifestyle of striving to be a Mod… but this time, set in the very thick of the ’79 Mod revival.

Perhaps the best way to describe A Crafty Cigarette in short is a British warm and witty coming of age story with Mod, especially The Jam, being key to the plot.

Paul, Rick and Bruce parted company as a trio 34 years ago this coming year, yes Foxton has played with Buckler and Weller since, but as the Woking Wonders no. Despite their self-imposed demise back in 1982 The Jam is still an important band for original and new fans.

The success of the recent Jam exhibition ‘About The Young Idea’ music proves this, along with a variety of books about the band and Universal Music knowing that any Jam compilation they release will always be well received.

I am truly pleased they continue to inspire and influence people.

I suppose the impact and direction The Jam gave me came back when I wrote the first words for A Crafty Cigarette – Tales of a Teenage Mod ‘You bastards’, as I started listening to them again. Yet this time round they were more than music of my youth, their sound and attitude triggered off my early emotional memories and attitude. Once that started flooding back the writing progressed, not only did it become easy but also a joy, as I could step back in time and remember how powerful and brave they were.

I wanted A Crafty Cigarette – Tales of a Teenage Mod to be homage to them and the wonderful kids I grew up with. I wanted the novel to be upbeat yet intense to read, that to me is The Jam.

Then, just as when I heard The Jam for the first time I went on to discover new bands. yet this time  around as I  rediscovered the sounds of The Chords, The Purple Hearts, Secret Affair, Dexy’s Midnight Runners, Madness, The Specials , Nine Below Zero  and such like, I then went back a decade to the  sixties and listened to, Motown, Stax, The Who, The Small Faces, The Action, The Creation, The Yardbirds and many more.  I blew myself away, thinking fxxk, we were only 12 to 14 at the time, yet during our brief time on earth we had submerged ourselves into this great music , learnt about a youth culture from our parents, the odd book well one, Richard Barnes Mods and the older Mods ‘around town’.

We created and carried our own agenda and style from waking up in the morning to going to bed at night.  We really did live and breathe it and The Jam, as a whole, became our leading light.

I have been writing for many years, for my fanzine Positive Energy of Madness for the Acid House scene, then my own website ZANI, an online magazine for counter culture, yet I never tackled a novel before. I didn’t fear writing a novel nor did I think I couldn’t write one, what was missing was the drive. Then the band I discovered by accident in 1979 gave me what I had been neglecting in terms of being productive and creative. From that I went beyond the point of music as inspiration, as I watched anything I could on YouTube from those years, Grange Hill to Panorama, and I was quickly hooked.  I pushed myself as a writer by discovering new authors and returning to past authors to inspire and influence me; Hunter S. Thompson, Harlan Ellison, Mark Twain, Iceberg Slim, Patricia Highsmith, Alan Bleasdale, Richard Price, Paul Auster, Niccolò Ammanti, Frank Norman, Daphne du Maurier, Arthur Conan Doyle, Martina Cole, Mario Puzo, Gillian Flynn and a few more.  The foundation for writing is now set and I am penning my second novel, Tales of Oscar de Paul and Other Adventures, and two new books by different authors are coming out under ZANI by the close of this year.

Crafty Cigarette originally came out in Oct 2015 under a different publisher, peaked for about a month or so, even personally giving a copy to Paul Weller and Rick Buckler, that was magical, a fan giving his book to his heroes …a dream come true… oh yes.  Then, at the start of 2016 the sales and momentum dropped so I decided in late April 2016 to set up under the banner of ZANI.  11th May 2016 was the official birth of ZANI, the publishing side of the website was born. 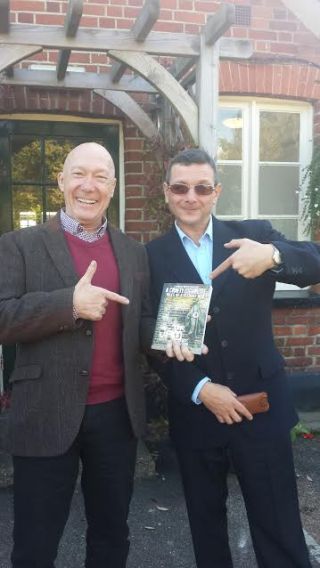 To date I haven’t looked back, I wish to thank everyone who has bought the book, and those like the good folk at Modernism here, who have supported me.  The success of the book so far, reminds me of The Jam, it is authentic and passionate, no PR or publishing companies funding or plugging A Crafty Cigarette – Tales of a Teenage Mod. I wouldn’t have it any other way, because all those years later like Paul, Rick and Bruce, ZANI is a free spirit and thinking outsider, the essence of Mod? As Paul Weller said at the end of The Jam ‘Belief is All’, ain’t that the truth………

For More information on An Intro to A Crafty Cigarette – Tales of a Teenage Mod – please visit: http://zani.co.uk/a-crafty-cigarette-uk

‘Crafty Cigarette, all things Mod  and a dash of anarchy. Want to remember what it was like to be young and angry? Buy this book. A great read’
Phil Davis (Actor Chalky in Quadrophenia) August 2016

‘It’s a good book and an easy read. That’s pretty much what most pulp fiction needs to be’
Mod Culture

‘Like a good Paul Weller concert the novel leaves you wanting more. I’ll be very interested in reading whatever Matteo Sedazzari writes next.’
Louder Than War

‘For a debut, Sedazzari has most certainly left a memorable impression with a story that readers from any background and any culture will find themselves enjoying’
Medium.com